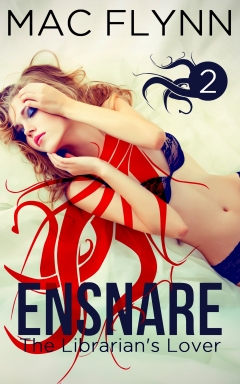 Part of the Ensnare the Librarian series:

Leslie Faulkner’s life takes a turn for the weird when she steals a discarded book from her librarian boss and takes it home. Things heat up when the book brings her luscious dreams of seductive tendrils. Her waking hours are no less dramatic when she meets a young man at the college who comes to her rescue, a book is found missing from the Forbidden Collection, and she finds someone sneaking around the library bookshelves after dark.

Her dull life of books and papers is about to get a lot more complicated, but through it all she still has her nights and her dreams to comfort her.

I woke up the next day feeling refreshed and chipper. My wonderful dream filled me with a sense of hope for my dreary life and a boldness that wanted to grasp the world and make it mine. I sat up, stretched and smiled at the radiant noon-hour sunlight that drifted in my room. The heat from the sun reminded me of my precious stolen item, and even the sight of the inanimate book on my nightstand couldn’t dim my good mood. I picked it up and held it against myself, hoping but not expecting a reaction.
Nothing happened, of course, but that was fine. Even though my courage with self-gratification didn’t go past eating a chocolate bar, I was still happy with all those wonderfully lustful memories. I put the book back on the nightstand, hopped out of bed and dressed for class. There was a bright smile on my face all the way to my first class, and that’s when the day started going to hell.

One thought on “Ensnare the Librarian #2” 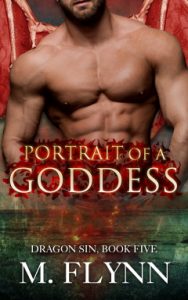 Portrait of A Goddess