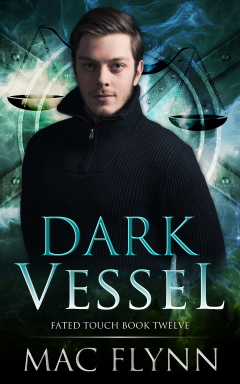 Part of the Fated Touch series:

Fate and the Man In Black have led Jane to the Island of Shadows, a mysterious place shunned by the locals and surrounded by rumors of dark spells and ancient phantoms.

They are warned not to go to the island where the last master lost his mind in his efforts to achieve what Gad could not, but their date with the Man In Black forces them onto the rocky, barren place where no man treads. They find their host waiting for them, along with an old and unwelcome foe. The Man In Black presents them with a challenge, one last feat to prove Jane’s worthiness: using the gift of the vidori they must scour the dark recesses of the castle and discover the truth about happened to the young master.

The task would be easier but for their adversary, a wily foe who is as intent at gaining the Man In Black’s favor as Jane is loathed to earn it. The dark halls, too, hold tight to their secrets, and as they explore the silent passages they find that there is a third party playing the game. Someone seeks to keep the past hidden, even if that means deadly consequences for Jane and her friends.

I had been through almost a dozen big adventures with my family, but this one felt different. This one was personal. I was the target.
I shook myself from my brooding thoughts and looked around me. My grandparents, Caius, and I were seated in a closed carriage that rocked to and fro with the rocky, uneven ground on which we traveled. Outside the sparse countryside was cast in gloom by the dark clouds that hung over us. The smell of rain permeated the air, along with a tension I couldn't shake.
"You're quiet," Caius spoke up.
I wrapped my arms closer about me and smile up at him. "Just trying to keep warm by keeping my mouth shut."
"You're still a horrible liar," he warned me.
"We shall soon have a view of the sea and the barren rock known as the Island of Shadows," Sage promised as he leaned out the window. "There."
I leaned out my own window and beheld the dark ocean that lapped against the rocky shores.