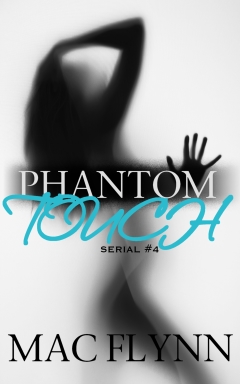 Part of the Phantom Touch series:

Jess has questions, and Eric has the answers. She confronts her ghostly lover, and he reveals his dark origins and why he is trapped between worlds. Jess’ troubles worsen when a knock on the door leads to a police investigation with her as the prime suspect.

Ashley dropped me off and sped off down the road, racing the setting sun. I looked up at the darkening horizon and felt a twinge of heat flare up inside me. It both scared and excited me. His control, his possessive nature, they were attitudes I’d been brought up to fight against, but after experiencing his deep, tender touches all I wanted was to fall into his dark arms. He offered pleasure and a satisfaction to my lust to be a woman loved and taken by her lover.
While I stood by the parking lot with a warmth spreading through my body, the shadows lengthened around me. A cold wind swept by me and dampened the sensual mood. I shook off the fog creeping into my mind long enough to stagger to my dorm room. The moment I shut the door and leaned back against it the heat returned, more forceful than before. I shuddered at the feel, as though a pair of warm hands were sliding up my body. My back arched and pushed my breasts out in a display of feral servitude.