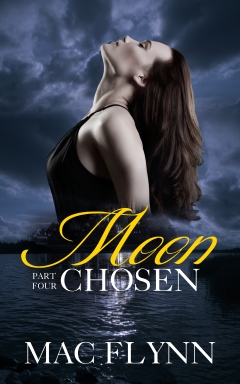 Part of the Moon Chosen series:

Friendship, trust, loyalty. Sophie learns the values of those words when Erik, Greg and she take off for travel among the islands on Wolf Lake. Their first stop is Market Island, a place of commerce for the inhabitants. What they find is a city damaged and a populace in fear. Fear leads to harsh words and rash decisions, and Sophie finds herself Erik’s only hope against a rising tide of hatred.

"Sophia? Sophia!"
Someone roughly shook my shoulder. I growled and rolled away from them.
"I don't want to go to work. Tell my boss I'm on vacation. . ." I mumbled.
"In werewolf society I am your boss, and I refuse to accept your excuse," the voice replied.
My eyes snapped open. I lay in the large four-poster bed in the drafty room of the Old Den. The fireplace was devoid of its warm, comforting flames and all was quiet. I whipped my head up and found Erik beside the bed. His hands were on the edge of the bed and he leaned over me.
"What's that b.s. about you being my boss?" I questioned him.
"I don't believe you've failed to notice that this werewolf society is very patriarchal," he commented.
I sat up and glared at him. "No, but you'd better not try any of that stuff on me."
He leaned away from the bed and dropped his arms to his sides. His lips pursed and he shook his head. "It can't be avoided.