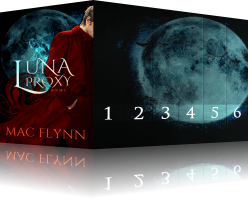 Part of the Luna Proxy series:

The entire Luna Proxy series in one complete package!

The dull, boring life of Leila Ulric stretches into the horizon. Little does she know that a new moon rises in the dark skies and brings with it a world of terrible and fantastic creatures known as werewolves. An insatiable curiosity drives her to learn more about these monsters, and so she travels on a journey that will redefine who she is and what she knows.

I’d always heard a guy could change your life, but for me a guy changed my whole outlook on life. He also changed me, but that’s getting a little ahead of my story.
My story starts that day when I moved up in the world. Literally. The announcement came with a knock on my apartment door.
My living quarters were, to be kind, small. There was a combination living room-dining room, and the kitchen was hardly more than the fridge and stove with two cupboards. My bedroom barely fit the bed, and the closet was the width of a skinny hamper and twice as tall. All other necessities, like a washer and dryer, and even a bathroom, were located down the hall in the communal area.
Outside the few, grimy windows was the world in which I lived. Dingy apartment buildings stretched into the distance and were finally finished when the residential sectors collided with the commercial district.

Authorities are investigating one of the leading research laboratories in the city after a gas leak destroyed part of the main facility. Witnesses reported hearing a large blast and saw flames shoot two hundred feet into the air. Twelve facility personnel are reported to have died in the blast. Their bodies have yet to be retrieved as the head researcher, Dr. Gail Scitus, blames city negligence for the accident.

“So do you think they’re telling the truth? About the gas leak, I mean,” he wondered.
I shrugged and handed back the paper. “I don’t know. I don’t believe anything until I see it for myself.”
“I heard some people saw something escape from there,” he commented.
“Probably some rabid minks,” I guessed.
“The thing was supposed to be huge. Like a bear,” he persisted.
“Then they should catch it pretty soon. Anyway, are you in on the apartment?” I asked him.
He tucked the paper under his arm and grinned. “I wouldn’t miss the chance for the world.”
“Good.” I turned away from him and back down the hall. “I’ll go tell Meyer and buy some stuff for the apartment. You get ready to move tomorrow.”
He stood at attention and saluted me. “Yes, ma’am!”
I rolled my eyes. What had I asked for? 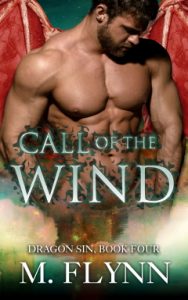 Call of the Wind